RNR is supported by readers. When you buy with our links, we may earn a commission.

Real New Reviews is supported by readers. We may earn a commission when you buy with our links.

>> Is this Theragun Alternative the Best Massage Gun for the Price? 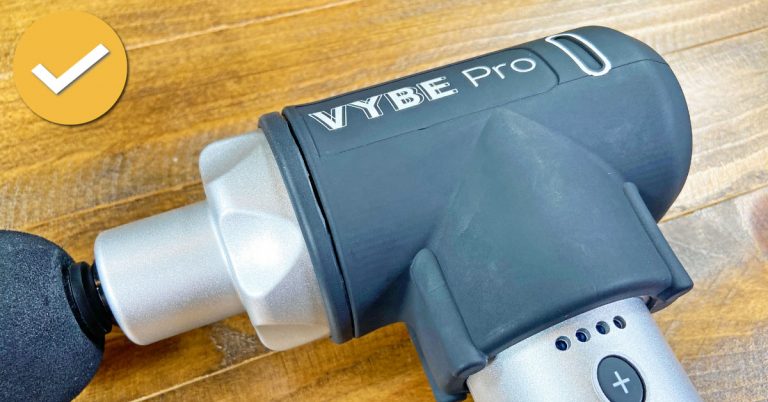 The Vybe Pro massage gun is a new Theragun competitor that has quickly developed a strong reputation on Amazon. If you’re looking for an affordable deep tissue massage gun, this Vybe Pro percussion massager may be a strong option to consider.

Best Massage Gun for the Price?

However, many name brand models can be pricey, costing upwards of $600. That’s why more athletes are seeking more affordable massage guns.

What is a massage gun?

How does a massage gun work?

Massage guns use an oscillating massager head with a repeating, hammering motion to help loosen muscle tissue and increase blood flow to muscle fibers. The massager heads make quick, repeated contact with the body at a large enough amplitude, or depth, to reach and activate deep muscle tissues.

What are the benefits of using a massage gun?

There are many massage gun benefits including reduced workout recovery time and enhanced muscle tissue elasticity.

Deep tissue percussive therapy with a massage gun can help lessen inflammation and reduce delayed-onset muscle soreness (DOMS), muscle pain that begins a day or two after a workout. These muscle massager guns can even be used before a workout to aid in muscle activation.

What’s in the Box: 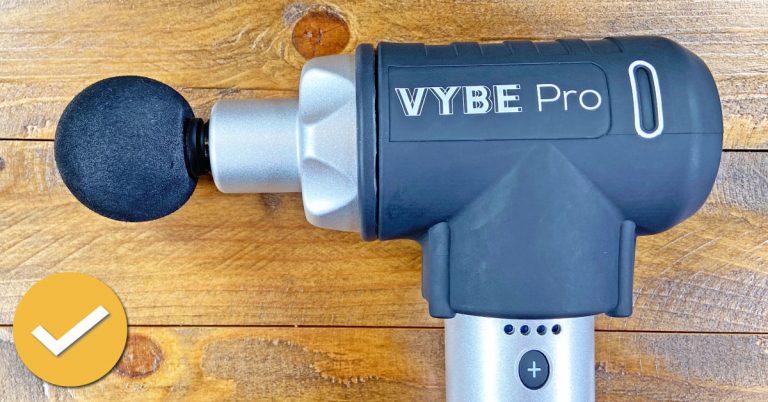 The included carrying case fits all of the included accessories and is made of a quality, durable soft touch foam plastic material. Inside the case, there is an individual slot for each of the included massage head attachments to sit snugly.

Strong and Durable, but Large

This Vybe massager itself is somewhat large and hefty, weighing about two pounds. It looks strong and durable, somewhat resembling a power drill. The black silicone wrap around the top and bottom are soft to the touch, and look a nice contrast to the massage gun’s silver body.

The Vybe Pro is very easy and intuitive to use. To turn on the Vybe Pro, just flip the switch on the bottom of the unit. To adjust the massage speed, use the up and down buttons on the side. The Vybe Pro arrived with a charged battery, so I was quickly using it only moments after unboxing.

My favorite attachments were the large foam ball, which worked well for me on my shoulders and feet, and the plastic fork shaped massager, which is an excellent back massager attachment.

To change the massager heads, simply pull out the current attachment and push in the new attachment head. These heads attach with a secure suction seal, which can take some effort and force to remove.

How to Change Massage Heads

To change the massager heads, simply pull out the current attachment and push in the new attachment head. These heads attach with a secure suction seal, which can take some effort and force to remove.

I recommend cleaning the massage heads with a microfiber cloth after each use.

The Vybe Pro uses a brushless electric motor to deliver 33 pounds of percussive force at nine different speeds, ranging from 1,800 to 3,400 strokes per minute. The Vybe Pro massager head oscillates at an amplitude (depth) of 12 mm.

For this Vybe Pro review, I used the massage gun at lower speeds (usually from 1 to 3), and found that to be plenty of power to break up muscle knots and aid in muscle recovery.

However, higher speeds were not uncomfortable to use. The rapid strokes of the higher speed settings smoothed out the percussive motion, which could be useful for treating smaller muscle groups on the body.

The Vybe Pro has a noise level of sixty decibels, which is approximately the loudness of a normal conversation between two people. So while audible when in use, the Vybe Pro is probably not loud enough to be very obnoxious or intrusive to those in the room with you.

In fact, I found the muted sound of the oscillating motor somewhat calming. The massage gun noise shouldn’t be loud enough to disturb others in the room, like when watching television together.

In fact, one full charge has lasted me several weeks of daily use. This extended battery life makes the Vybe Pro a good portable handheld massager for the gym, office, or even travel.

Although I am not an elite athlete, I do carry a lot of tension in my shoulders. Using the Vybe Pro with the foam ball massager head on a lower speed setting (1, 2, or 3) provided great results for me.

After using the Vybe Pro for the first time, the next day I immediately noticed results with an overall lower amount of tension through my shoulder muscles. I’ve since used the Vybe Pro daily on my shoulders and continue to see daily improvement.

For this use, I prefer to use the included metal cone massager head. With the Vybe Pro, I’ve successfully been able to reduce muscle tightness in the foot, heel, and calf muscles.

If you’re looking for a personal percussion massager without the high price tag, the Vybe Pro (Amazon) is one of the best handheld muscle massagers I’ve ever used. The low price makes this portable massage gun a terrific Theragun alternative.

I especially recommend this deep muscle massager as one of the best percussion massagers for athletes, including CrossFit athletes and strength training athletes who may see enhanced benefits from reduced workout recovery times.

The Best Message Gun for You?

Whether you’re an experienced athlete or a gym beginner trying to get into shape, a massage gun may help you prevent muscle soreness from workouts and increase your recovery time.

While massage guns may not be quite as beneficial as a professional massage, the convenience and portability of a handheld percussion massager make this a worthy purchase for most athletes, fitness enthusiasts, or anyone seeking to reduce muscle tension or tightness.

After researching many different brands, I’ve found the Vybe Pro to be one of the best massage guns on Amazon for muscle soreness and muscle recovery.

So if you’re looking for a massage therapy gun at a lower price point, the Vybe Pro is an excellent, affordable alternative to name brands like Theragun and Hypervolt.

Ready to purchase your own Vybe Pro? Buy this massage gun on Amazon here.

Up Next: The best premium wireless keyboard?

Amazon.com Disclosure: As an Amazon Associate I earn from qualifying purchases.

This website uses cookies to improve your experience while you navigate through the website. Out of these cookies, the cookies that are categorized as necessary are stored on your browser as they are essential for the working of basic functionalities of the website. We also use third-party cookies that help us analyze and understand how you use this website. These cookies will be stored in your browser only with your consent. You also have the option to opt-out of these cookies. But opting out of some of these cookies may have an effect on your browsing experience.
Necessary Always Enabled
Necessary cookies are absolutely essential for the website to function properly. This category only includes cookies that ensures basic functionalities and security features of the website. These cookies do not store any personal information.
Non-necessary
Any cookies that may not be particularly necessary for the website to function and is used specifically to collect user personal data via analytics, ads, other embedded contents are termed as non-necessary cookies. It is mandatory to procure user consent prior to running these cookies on your website.
SAVE & ACCEPT